A Rich Blend of History, Tradition and Culture

Tiru Coffee is about offering our friends the very best of what the Ethiopian coffee culture is so famous for. The company name “Tiru” was chosen because this word means “delicious” in the native Amharic language of Ethiopia. The Tiru Coffee team sources its special coffee beans exclusively from Ethiopia. We provide our customers with unique and delicious coffee from the diverse regions of Ethiopia where coffee originated so everyone can experience their exotic flavors. The incredible Ethiopian coffee beans owe their exquisite flavors to the altitude, climate, and soils found in each of the regions and mountains they are harvested from.

Tiru Coffee beans are hand selected from heirloom plants, natural processed, and single sourced from the Harrar, Sidamo, and Yirgacheffe regions of Ethiopia.

The Tiru Coffee staff is responsible for discovering the very rare and exotic Mihuri micro-lot coffee beans which are hand selected to represent the absolute highest quality and exclusive coffee sourced from Ethiopia.

Everyone at Tiru Coffee invites you to explore the flavors of their Ethiopian coffee by joining a monthly subscription. Enjoy. 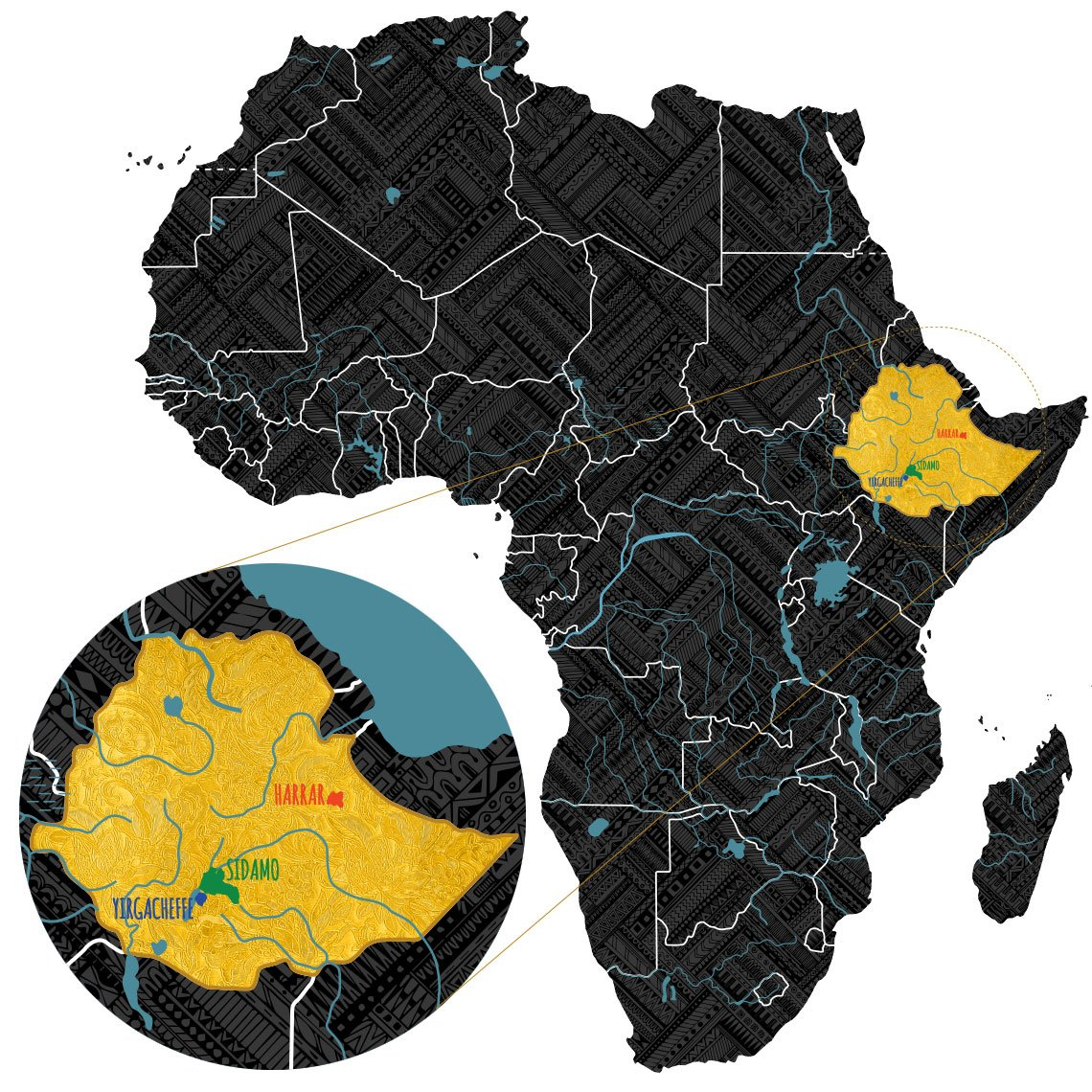 Ethiopia: The Birthplace of Coffee

Ethiopia is generally accepted as coffee’s birthplace. It’s where the coffee plant, coffea arabica, originates and coffee cultivation is commonly believed to have begun in the region around A.D. 900.

Although no one knows for sure how the energizing effect of ingesting coffee was discovered, there are a host of theories. The most popular coffee origin legend is Kaldi and his dancing goats. The tale commonly goes that around A.D. 850, Kaldi, an Abyssinian goat herder from Kaffa, Ethiopia, was herding his flock through a highland area when he noticed the goats acting strangely. Their loud bleats and frenzied jumping made it seem as if they were dancing on their hind legs. Curious about the source of the goats’ excitement, Kaldi followed them to a small shrub loaded with bright red berries. Kaldi picked a few of the berries and tasted them himself. Like his goats, Kaldi felt energized by the berries. He filled his pockets and hurried home to show them to his wife, who suggested he share the berries with the monks at a nearby monastery.

According to legend, the monks were suspicious of the berries at first. In fact, one monk threw them into the fire, calling them “the Devil’s work”. This is the pivotal moment of the story, and the coffee beans began to roast in the fire. This created an aroma that was so enticing, the monks dug the beans out of the burning embers. To prevent the coffee beans from completely burning up, the monks crushed them and then covered them in hot water. Unable to resist the delicious smell, all the monks in the monastery lined up to try the mysterious new drink. Like Kaldi and his dancing goats, the monks also felt energized by the coffee. From that day forward they drank it every day to stay awake during their long hours of prayers and spiritual devotions.

Legendary origin story aside, Ethiopian coffee beans owe their distinctive flavors to the regions in which they’re grown and the way they are processed. The differences in altitude, soil composition and weather patterns across Ethiopia have led to the development of more than 1,000 known genetic coffee varieties in the country. Incredibly, there are still thousands more waiting to be discovered. In comparison, there are only about 30 known varieties in Colombia.

When it comes to coffee beans, those grown in higher altitudes (above 3,000 feet) like our Sidamo coffee tend to be denser, harder, have a superior flavor and are therefore considered to be higher quality than those from lower altitudes. In general, as altitude increases, the flavor profile of a coffee bean becomes more complex and distinct. It may have notes of chocolate, vanilla, citrus or nuts. The flavor could be sweet and smooth or spicy, fruity or even floral. With most coffees in Ethiopia growing at altitudes between 4,900 and 8,900 feet, they’ve long been regarded as some of the highest quality beans in the world.

Coffee trees love the growing conditions in areas with high altitude because there’s no frost and the temperatures are mild, averaging 60-70 degrees Fahrenheit year-round. The cool mountain temperatures slow the growth of the coffee tree, allowing the bean to develop more slowly, resulting in more complex sugars and flavors. With plenty of sunshine, moderate rainfall and good drainage, the fruit itself retains less water, creating a denser bean that’s brimming with flavor.

Coffee harvest usually happens only once a year. In Ethiopia and other countries north of the Equator, it takes place between September and March. In regions south of the Equator, it’s typically between April and May. Coffee is usually harvested by hand and can be done by stripping all the cherries off the branch at once. In the case of arabica beans, like those in Ethiopia, cherries can be selectively picked off the trees. Although it’s more expensive, this method allows for a higher percentage of quality berries in the harvest.

In addition to environmental conditions, the unique dry processing methods used in Ethiopia create more complex taste profiles than those found in beans from other parts of the world.

Natural or sun-dried processing: The cherries are dried in the sun with the coffee bean still inside. This gives naturally processed Ethiopian coffees a heavy, syrupy body with a dense, sweet fruit or berry flavor. It evokes a wine-like taste that usually has an aroma of blueberry or strawberry.

For the people of Ethiopia, coffee is heavily ingrained into the culture. Everything from the language and economy to daily routines revolve around or are impacted by coffee. This is a primary reason we chose to distribute Ethiopian coffees exclusively.

Today, about 3% of the world’s supply comes from Ethiopia, which is the seventh largest global producer. About 60% of the country’s foreign income is from coffee, even though most of the beans are consumed by locals rather than being exported. According to the USDA, Ethiopia is the largest coffee exporter in Africa and the tenth-largest exporter in the world. In 2019, Ethiopia is expected to export nearly 4 million bags of coffee. More than 15 million Ethiopians earn a living from the coffee industry, but only 20% of the country’s coffee production comes from commercial farms. The rest comes from small farms or is harvested from wild-growing plants.

With a rich history dating back over a thousand years and much of the country relying on the coffee industry for its livelihood, it’s no wonder that coffee is a central part of Ethiopian culture and language. In fact, many expressions about food, life and even relationships include a reference to coffee. The word for coffee in the Ethiopian national language (Amharic) is “buna”. One ancient proverb that demonstrates the depth of coffee’s significance is “Buna dabo naw”, which translates to “coffee is our bread”. “Buna tetu” literally translates to “drink coffee”, but the meaning also extends to the social aspect of getting together with others to have coffee. In Ethiopia, drinking coffee together is a cherished time for socializing and conversation, which can range from serious discussions to gossip. A cautionary expression, “do not let your name get noticed at coffee time”, warns against acting in ways which might make one a topic of gossip. And, when someone says, “I do not have anyone to have coffee with”, he or she is saying they don’t have close friends.

Having coffee together is an integral part of the social culture in Ethiopia, so much so that there’s a special way of preparing, serving and drinking coffee with others. The Ethiopian coffee ceremony is a meaningful way to socialize and show friendship, respect and hospitality to family, friends and guests. As many as 3 times a day, women wash and roast coffee beans by hand in front of guests. The ceremony leader then grinds the beans and mixes them directly with water in a special clay pot. The coffee is served in small espresso-style cups. Throughout this process, guests swap stories and share struggles, triumphs, laughter and love.

Tiru Coffee is committed to the economic future of Ethiopia and its children by supporting the legendary coffee culture of this beautiful country.

Your cart is empty